The Sony UP-DF550 Film Station- while retaining nearly the same compact body size as the UP-DF500 – supports four different film sizes 35 x 43cm, 27 x 35cm, 24 x 30cm and 18 x 24cm inch Sony Blue Thermal Film. These various print sizes make it suitable for a variety of diagnostic modality printing tasks. The Sony UP-DF550 is equipped with two film supply trays, each with a capacity of 125 sheets. The upper tray is dedicated only for 35 x43cm films, while the lower tray is applicable for all other sizes. The printer is also equipped with an output tray to sort out into 35 x 43cm film prints and all other sizes. This makes it easy for users to locate the printed films they need, quickly and easily.

By combining a newly developed thermal printing head and an improved PQC (Picture Quality Control) feature into Sony’s proven thermal printing technology, diagnostic images can be reproduced clearly and accurately. The Sony UPT-517BL Blue Thermal Film has been especially designed for use with the FILM STATION™ to provide high-contrast and high-density images with higher durability.

The FILM STATION™ is based on Sony dry-processing technology, which does not use liquid chemicals or heavy metals such as silver on thermal film. This frees you from the hassle of disposing of chemical or industrial waste. In addition, Sony thermal film is highly environmentally friendly because it doesn’t use chemicals such as an alcohol.

Ease in use and in maintenance.

A supplied cart with rollers is available for easy maintenance when the unit is installed vertically. The film feeder tray is equipped with a tray stop so that when the tray is slid out of the imager, it does not come out completely making it much easier to refill at daylight. To refill the imager, simply slide the tray out, open a part of the cover, and place up to 125 sheets of film in the tray. A variety of data, such as gamma curve and sharpness settings, can be stored in a removable flash memory card for backup purposes. Self-diagnosis data can be automatically sent to the designated service centre when an error is detected.

Thanks to an innovative printing mechanism, the Sony UP-DF550 has a compact design with approximate dimensions of 600 (W) x 316 (H) x 686 (D) mm and a weight of only 63 kg. The printing mechanism also enables the Sony UP-FD550 to be oriented vertically as well as horizontally. The footprint is one of the smallest in its class at only 686 x 316 mm, which is almost same as the UP-DF500 when it is placed vertically. A vertical installation is ideal when space is limited or the unit must be integrated into your CT or MRI control room, mobile coach, or military ship etc. Plus, you can easily move the Sony UP-DF550 using the bundled carts, which is equipped with a roller. 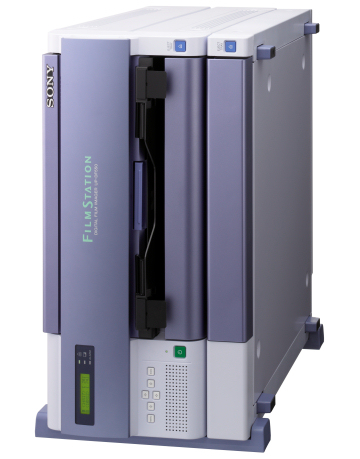 Network settings such as an IP address can be easily controlled via the front panel of the UP-DF550 without having to use any other tool, like a Windows® PC or web browser. 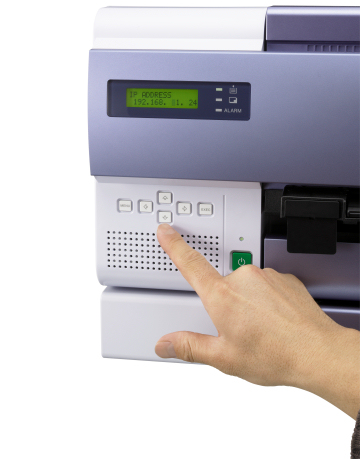 In accordance with worldwide medical imaging communications standards, the Sony UP-DF550 is equipped with a DICOM interface, which enables it to be connected to a hospital imaging network.

From the moment it is turned on, it takes only two minutes before the Sony UP-DF550 is ready to start printing. It’s effective in emergency use.

To prevent dust particles and other foreign matter drawn through the cooling fans from accumulating onto the film, the UP-DF550 has been designed with two completely separate sections, an electronics section and a mechanical section. In addition, the area of contact between the thermal head and the film is totally isolated from those air flows. To further prevent foreign matter from damaging your prints, the film remains inside the UP-DF550 until the printing process is completed. If dust particles do come to rest on the film pass, a dust cleaning roller positioned in front of the thermal head cleans the surface of film before printing. Since the dust cleaning roller is disposable, users can easily replace it when it becomes dirty.

The Sony UP-DF550 adopts a totally environmentally friendly printing system. No liquid chemical is used in the printing process and no chemical waste is produced after printing. Furthermore, Sony thermal film doesn’t contain any metal component like silver. So it can be treated as household waste, rather than as industrial waste.